In the previous instalments we got a glimps or two on the owner of the Market Garden Frank. Now we get his story. And damn what a heavy topic it includes!

When Nick retires as dom-for-hire a replacement has to be found. This comes along as big cocky Ex-US-soldier called Stefan/Brandon. And even though he's Frank's wet dream incarnate they don't jump into the sheets right away. 'Cause not only Frank's principle to never get involved with emplyees but also because Frank has to deal with a serious secret.

In fact, everything about this seemed like a recipe for disaster.
But even if he was headed for the mother of all car crashes, he couldn't bring himself to hit the brake with everything he had, not for his sake, not for Brandon's sake, or Market Garden's, or sanity, or morality, or because it wasn't fair or even very balanced.
Seemed all he could do was grip the steering wheel and keep going until something stopped him.

If I should tell you what I loved so hard about this book, I really don't have a clue where to start.

Okay... let's start with the easy part. The sex. As always in the Market Garden series it was scorching. And while it again was about dominance it was another kind of kink this time. (Paintball will never be the same again for me!)

This pic has no relation to the story, I just found it while looking for paintball pics, so I put it into a spoiler. 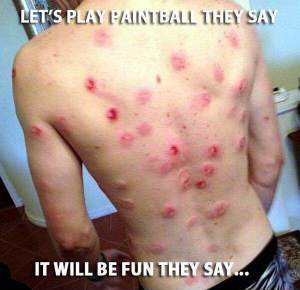 I think I don't have to say much about the writing of the author duo Witt/Voinov. As great as always.

I loved how Frank and Stefan/Brandon were just perfect for each other even though they had an age gap of 16 years.

"I've still got fifteen-mumble years on you."
Brandon didn't even flinch. "So did my last boyfriend."
"You do like older men, don't you?"
"I'm not opposed to men my own age." Brandon leaned forwards on his elbows. "I mean, if you can call them that."
Frank laughed. "They're hardly boys."
"Says a man who's probably never dated a soldier." Brandon broke eye contact and focused on spearing a piece of meat on his fork. "Like I said, not opposed to guys my own age, but I've always been more compatible with guys who are, well, your age. And no, it's not a Daddy thing. I just... click better."

I felt for Frank who was so starved for touch.

I really loved the deep friendship Frank has with Mike, Geoff and Emily.

"In case you'll have need of a best man again..." Geoff looked straight into his eyes. "I see how fond you are of him. You guys make a good team, too. So, if that matter comes up, I'm claiming that best man spot before Mike snags it."

While the previous books were only some shorties this is a full-length novel and with all its nessessary seriousness and feels it's still a hot and fun read. This mix let me give it 5 stars happyly!

You haven't read the series yet? Why? What are you waiting for? ;-)

Also in this series